Welcome to the Shadows of the Damned Wiki 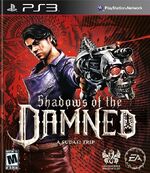 Shadows of the Damned is an action-horror video game in development for the PlayStation 3 and Xbox 360 consoles. The game was directed by Massimo Guarini, produced by Goichi Suda and Shinji Mikami and developed by Grasshopper Manufacture. It was published on June 21, 2011 by Electronic Arts. The storyline of Shadows of the DAMNED takes 8 hours to complete. Played from a third-person perspective, the game follows protagonist Garcia Hotspur from an over-the-shoulder camera angle. Players must strategically lure enemies away from patches of darkness, as the shade makes Hotspur's foes invulnerable. Hotspur wields a torch, revolver, machine gun and shotgun, all of which are actually a demon named Johnson in disguise. 80 upgrades are reportedly available to aid Hotspur's arsenal.

we are currently housing 54 articles, and 80 files,
help us add content and expand this wiki!

Retrieved from "https://shadowsofthedamned.fandom.com/wiki/Shadows_of_the_Damned_Wiki?oldid=4769"
Community content is available under CC-BY-SA unless otherwise noted.